2019 Urbandale Citizen of the Year Announced 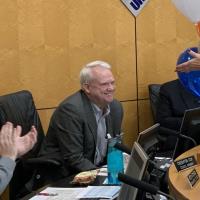 While serving three terms on Urbandale City Council, Tom has worked tirelessly for the Citizens of Urbandale.  In addition, he has served in a number of capacities including: as Chair the DART Commission, Mayor Pro Tem in 2011 and 2014, Co-Chair of the Community Improvement Program 2012 – 2014, Urbandale Citizens Fire Academy graduate, Urbandale Citizen’s Police Academy graduate, Iowa Honor Flight volunteer and guardian, Urbandale Chamber Past President, Urbandale Chamber Board Member, Urbandale Chamber Volunteer of the Year, Greater Des Moines Partnership Affiliate Chamber Council President,Greater Des Moinse Leadership Institute Graduate, Eagle Scout and Northwest Rotary Club member from 2000 - 2005 .  Annually, he would travel to Washington DC to advocate on behalf of Urbandale and for public transportation. He has served on the Urbandale Economic Development Task Force as well as is a Past Board Member for Rebuilding Together of Greater Des Moines and the Des Moines Embassy Club.

Prior to his time on Urbandale City Council, Tom led the Chamber’s first Total Resource Campaign, which launched the organization to the next level.  "Tom bleeds Urbandale" was the last statement written in Tom's nomination, and the Chamber agrees.

Tom will receive his award during Sample Urbandale, A Celebration of Business on Thursday, September 21, 2019.  Tickets are on sale now for $35 each.  See below for additional details.  A special thank you to Conference Technologies for sponsoring the 2019 Citizen of the Year award.

The Urbandale Chamber of Commerce is a membership-based business organization that serves, protects and promotes its members.